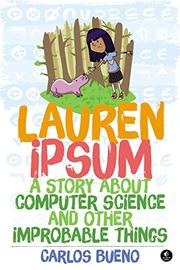 A Story About Computer Science and Other Improbable Things

A lost girl travels through a fantastical Alice in Wonderland–esque world filled with The Phantom Tollbooth–like computer-programming metaphors.

After an argument with her mother, Lauren Ipsum goes for a walk through the woods. Quickly lost in Userland, she starts to encounter physical manifestations of computer science ideas, such as the Jargon creatures, seemingly benign at first but quickly revealed to be obnoxious. The various loony characters she encounters each champion different aspects of logic—specifically, the kinds of logic and perspectives used in programming and problem-solving—giving Lauren the tools she needs for her rambling journey home. While serving as an introduction to programming for kids, it avoids the nitty-gritty of code in favor of clever analogies that guide readers toward the type of thinking that will facilitate learning computer science. The extensive backmatter—a segment titled “The Field Guide to Userland”—details how Lauren’s logic solves the various puzzles and how the solutions relate more practically to computer science, as well as providing jumping-off points for future subject exploration. The story is funny enough on its own, but the sly puns missed the first time around will keep the book fresh for those rereading after learning more programming. The intelligent female protagonist and casually multiethnic illustrations normalize inclusivity in computer science for young readers.