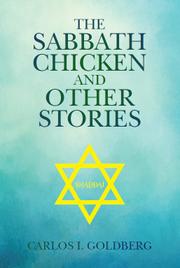 The Sabbath Chicken and other Stories

This debut collection of interconnected short stories revolves around the life of a Brazilian Jew transplanted to New York City.

“I don’t know, but maybe all my problems are somehow connected with chickens.” So goes the promising opening line of the title story, first of more than 20 short stories comprising this collection. Most follow the developing life and perceptions of Charles Goldstein, who sometimes serves as a minor character. Born in Brazil and originally named Isaac, he changes his name after coming to New York City as a teenager sometime after World War II to study at the yeshiva. The Lower East Side, he discovers, is very similar to Rio de Janeiro’s Jewish ghetto. Though a dedicated Talmud student, he loses his faith in a crisis of belief while still at the yeshiva, and eventually becomes a psychologist instead of a rabbi. Charles gets his degree, moves to the Midwest, marries (then divorces and remarries), and visits Israel. Many stories have to do with Charles’ family: childhood reminiscences, dinner around the seder table, or saying goodbye to aging parents. Others explore his relationships, such as the difficult first marriage or dating post-divorce. Goldberg’s narrative often includes the Yiddish inflections and vocabulary familiar in Jewish American fiction from Philip Roth to Jonathan Safran Foer: “She put me on a pedestal like her expensive china ‘tchatchkess’ [sic] and with black-and-white shoes yet, but she herself would go around ‘farshlumpet.’ ” This voice adds liveliness and authenticity to scenes of Jewish life around the world. As the stories accumulate, they reveal layers to Charles’ character; he can be thoughtful, self-pitying, tetchy, wise, foolish. But accumulation also means repetition—lots of it. The pivotal crisis of faith, for example, is described five times in 500-plus pages, always in the same terms, but without elaborating on or developing the moment. It’s as if Charles is one of his own patients, stuck in past dramas.

More judicious story selection would benefit this portrait of an intriguing man.