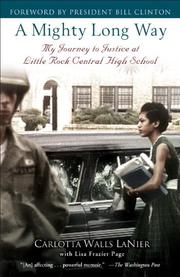 My Journey to Justice at Little Rock Central High School

Well-crafted look at the wrenching experience of the youngest of the “Little Rock Nine.”

In the fall of 1957, three years after Brown v. Board of Education ordered the desegregation of all U.S. public schools, 14-year-old Carlotta Walls (now LaNier) signed up to be among the first black students at previously all-white Little Rock Central High School in Arkansas. This naïve, earnest decision would affect every facet of her life, as well as the lives of her family and neighbors. Coached and encouraged by the local NAACP branch, ten students attempted to attend Central High, only to be turned back by an ugly mob and the Arkansas National Guard, dispatched to encircle the school by staunch segregationist Gov. Orval Faubus. As lawsuits pressed by Thurgood Marshall and other civil-rights lawyers were pursued, President Eisenhower dispatched federal paratroopers to avoid “anarchy” and accompany each of the nine students (one had given up) to their classes. “Getting inside Central was just the beginning,” remembers the author; now she faced “a brand new struggle: finding a way to survive.” The daily abuse, both verbal and physical, caused intense stress; LaNier’s memoir vividly depicts the students’ and their families’ blistering struggles. Faubus illegally closed down all the area high schools during the ’58-59 school year (“the Lost Year”), and the violence worsened; Walls’ home was bombed. She left Little Rock for college and a career, loath even to mention her involvement for many years. Finding her voice, as she notes, came much later, and this hindsight account suggests that the nation still has not achieved closure about the painful events at Little Rock.