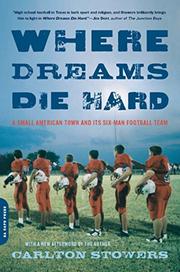 A Small American Town and Its Six-Man Football Team

They love their football in Texas—so much so that they find ways to play it without the regulation dozen-minus-one players on the field.

The little North Texas town of Penelope, writes true-crime veteran Stowers, has only a couple of hundred residents and only a couple of businesses, a granary and the post office. With so small a population, the high school could not field a regulation team and so, a few years ago, adopted the “strange and fast-paced game called six-man football,” which, nationwide, is played by around 225 to 250 schools. That’s a big drop from the 30,000 schools that played six-man football in the 1950s, but by Stowers’s account Penelope is a ’50s kind of place—almost entirely white, not particularly well off but not particularly poor, Republican and without much to do. Though the team that Stowers chronicles over the 2004 season wins logarithmically fewer games than it loses and plays mostly against folks who are also, it seems, playing to stave off the dread fear of having nothing to do on Friday night, the Penelope High School Wolverines do a mighty fine job with what they’ve got. Moreover, they give the town a purpose, so that almost everyone in Penelope shows up for both the home and away games. There’s precious little glory here; as Stowers notes, only a handful of players have gone on to play college or professional football, the great exception being former Washington Redskins head coach Jack Pardee. Still, as Stowers remarks, most of the kids play their hearts out once they understand that such is the Texas way, learning valuable life lessons and, well, keeping themselves occupied.

North Dallas Forty it ain’t, but it all makes for a pleasing read for those who like their gridiron gladiators on the guileless and underdoggish side.