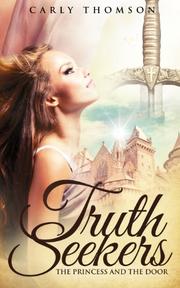 The Princess and The Door

Two friends embark on a make-believe adventure that turns real in this first book in Thomson’s (Truth Seekers: Be Strong and Courageous, 2015, etc.) middle-grade Christian-fiction series.

One afternoon, best friends Isabella Johnson and Josie Springwood decide to play “imagine if” and make up a story that incorporates the key that Isabella wears on a necklace. It’s the only thing that Isabella has left of her mother, who disappeared five years before. The girls use the key on an old stone door and, to their surprise, it fits perfectly. Passing through the door transports the girls into a beautiful forest, and they quickly realize that their game has led them to another world. Then a band of men capture them, and the youngsters soon learn of the troubles of the land, involving the evil King Ahaza and the beloved queen he captured. It also becomes clear that there may be more to Isabella than she knows, and that the girls’ arrival could herald a change, both for the new world and for Isabella’s broken family. Thomson’s book has a promising premise and starts off strong. Unfortunately, the author doesn’t smoothly develop either the story or the characters. Instead, the narrator frequently tells readers that characters suddenly know the truth of something (“somehow she knew this boy was trustworthy”; “One thing I know is that you are your mother and father’s daughter”). Isabella starts as a shaken, confused, and unsure girl whose prayers lead to sudden, unexplained knowledge, including her solid determination that she’s a “servant-princess” who will lead the people against the evil king. The author overuses divine inspiration as both a reaction and solution to nearly every situation, resulting in a story with little suspense. Ultimately, there isn’t much in this book that will capture readers’ imaginations beyond the initial setup, as they learn relatively little new information about the characters as the story goes on.

An intriguing premise, but one that fails to develop.