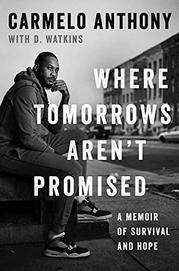 A Memoir of Survival and Hope

by Carmelo Anthony with D. Watkins

The coming-of-age story of a future NBA Hall of Famer who has conquered numerous challenges on his journey.

Anthony is recognizable even if you’re not a fan of the game. A consensus All-American and NCAA champion at Syracuse, three-time Olympian, and 10-time All-Star, he’s had a remarkable run. For those looking for a deep dive into his profession or notes on the mechanics of his game, this isn’t it; but it’s more than that. Many sports memoirs start with an origin story, but this one is more thought-provoking than one might expect. Kudos to Watkins, who shapes the narrative and rhythm without stepping on Anthony’s voice. The book begins at Madison Square Garden at the 2003 NBA draft; Anthony was the third pick after LeBron James and Darko Miličić. “Am I excited?” he remembers. “I’m a Black kid from the bottom. I had to fight through some of the toughest housing projects in America. I’m standing here tonight as a potential top five, top three, maybe even top two NBA draft pick….My mom had worked two jobs for as long as I could remember. Now I would be able to take care of her, buy her a house, a car, a mink—whatever she wanted—and that was exciting.” The primary story is the author’s impressive life trajectory, from the projects of Red Hook, Brooklyn, to the mean streets of Baltimore to Syracuse and, eventually, NBA superstardom and sports icon. Throughout, the losses are palpable, including the death of his stepfather to diabetes and the murder of his older cousin. Through it all, Anthony has stayed true to his core beliefs. “I’m loyal to everybody, because I believe in humanity,” he writes. “But I’m especially loyal to my family and the people I love, even if I know they wouldn’t do the same for me. That’s just how I am, no questions asked.”

Neither a tell-all nor an exercise in self-aggrandizement, this is an inspirational, engaging story from a straight shooter.