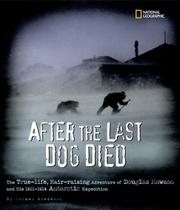 AFTER THE LAST DOG DIED

The True-Life, Hair-Raising Adventures of Douglas Mawson and His 1911-1914 Antarctic Expedition

This liberally illustrated survival tale makes reading as compelling as any of the recent accounts of Ernest Shackleton’s contemporaneous ventures. Unlike Shackleton, Australian geologist Mawson mounted his ill-starred expedition for (mostly) scientific purposes. Having set up base camp at Cape Denison, soon discovered to be “the windiest place in the world,” Mawson departed with a small party on sledges in November 1912. He returned alone and on foot the following February, having lost nearly all supplies, and both human companions (one, Bredeson hints, to vitamin-A poisoning from a forced diet of sled-dog livers), but surviving a 320-mile trek back. Supplemented by expedition photos of dim, windswept landscapes, and laced with horrifying details—at one point Mawson takes off his socks, and his soles peel off with them—this lesser-known, tragic episode from the golden age of Antarctic exploration won’t fail to give readers both chills and thrills. (roster, time line, resource lists, index) (Nonfiction. 11-13)