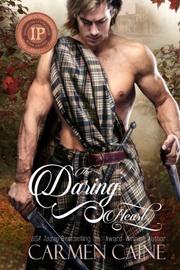 Set among princes and pretenders in 15th-century Europe, Caine’s (The Bedeviled Heart, 2011, etc.) third volume in the Highland Heather and Hearts Scottish Romance series pairs a dashing spy with a reluctant assassin.

Scottish wastrel Lord Julian Gray is taken aback when he wakes in bed with a woman who wasn’t there the night before. She presses his own knife to his ribs, with her furious brother, Orazio, at Julian’s chamber door. Julian, however, knows the brother as a dangerous Venetian assassin. What Julian doesn’t know is that the young lady between his sheets, Liselle, is also an assassin, trained from birth in the ways of the Vindictam. Yet Julian’s good-for-nothing persona is just an act; he’s really the notorious spy Le Marin, currently embroiled in the Duke of Albany’s latest attempt to dethrone his brother, James III of Scotland. When Julian discovers Albany has allied with England, it’s the last straw, and he sets out to warn the clans. Meanwhile, Liselle is sent to Scotland on her first official assignment—to kill an old man suspected of betraying the secrets of Venice’s salt trade. But can she really follow through with the murder? Can Julian help Scotland maintain its independence? And is the attraction between them enough to overcome the secrets each must keep? While Caine claims that her books “will always be romances first and historical second,” it’s the history that’s most interesting here. The late Middle Ages provide an intriguing setting, and the international intrigue between families and nations is similarly compelling. The hero and heroine don’t quite hold up well under scrutiny, however, especially Liselle; it’s hard to believe that after 20 years of Vindictam discipline, she’d develop scruples quite so quickly. And readers who prefer more steam in their romances may be disappointed that Julian and Liselle exchange only kisses.

A fresh historical setting and a fun, if improbable, premise make for a comforting read featuring a couple worth rooting for from their first dagger-point meeting.

A Mistake of Consequence
by Terri Evert Karsten
Fiction

IN THE COMPANY OF THE COURTESAN
by Sarah Dunant
Fiction

ONCE UPON A TOWER
by Eloisa James
Indie

Song of the Highlands
by K.E. Saxon
Fiction