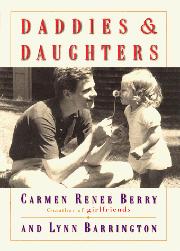 A shallow celebration of fathers and daughters. Berry (co-author of the bestselling Girlfriends: Invisible Bonds, Enduring Ties) and Barrington, a record producer, interviewed themselves and dozens of daughters and fathers to collect the stories of attachment that appear in this book. The anecdotes seem to have been published almost exactly as they tumbled out of the tape recorder. Occasional contributions have the self-consciously florid voice of a novice in a creative writing class. The book is organized in roughly chronological order, from birth (of the daughters) to death (of the fathers). The first section, winningly titled “It’s a Girl,” asks fathers to recount their experiences with pregnancy, birth, and bonding with their new babies. One father lovingly carried the baby’s sonogram picture with him for months before she was born; another’s attachment to his daughter deepened, more earthily, when she had her first bowel movement. The second section is devoted to the maturation process of girls growing up and in the course of it learning from their fathers. Section three concerns fathers and adult daughters; the last section deals with fathers’ regrets, reconciliations, illnesses, and deaths. Each chapter is preceded by quotations from famous daughters, including Colette, Eleanor Roosevelt, and Marie Osmond. There are chapters on dads and pets, dads and cars, dads and dates, and a singularly unamusing one titled “He could always make me laugh.” (Clearly, you had to be there.) Not all of the fathers featured here wear halos—abusive and absent fathers are also included on the roster—but for the most part, the stories reach happy endings. A concluding section lets some of the daughters, including the authors, sum up each father’s impact on their lives. Typically, the women praise their fathers for encouraging them to fulfill their dreams. Mostly trite—and unworthy of the fathers supposedly honored. (Author tour)