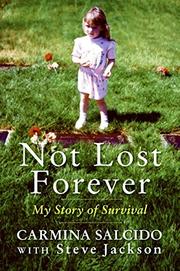 My Story of Survival

by Carmina Salcido and Steve Jackson

A bloody story of murder and survival, combined with the author’s account of her life afterward, assisted by true-crime vet Jackson (Love Me to Death, 2002, etc.).

Salcido was not quite three years old in 1989 when her father slit her throat and left her to die in a dump in California’s Sonoma Valley. That same night, he also killed her two sisters, her mother, her grandmother and the man he suspected of being his wife’s lover. Some parts of the book—the prologue, epilogue and certain sections of chapter—are clearly identified as Jackson’s work. Others, presented as being narrated by Salcido, are based not on personal recollections but on newspaper articles, court documents and interviews with detectives and witnesses. The final chapters chronicle Salcido’s life after the murders. Her grandfather—a member of a politically, religiously and culturally reactionary Catholic organization, the American Society for the Defense of Tradition, Family and Property—felt unable to care for Salcido and arranged for her adoption by a Midwestern family that belonged to the arch-conservative group. Isolated, lonely and poorly home-schooled, Salcido got away at age 17 by joining a Carmelite order. When bouts of depression made life in the convent impossible, she was asked to leave. Her next refuge was a center for troubled girls called God’s Cowgirl Ranch. Alarmed by the harshness of discipline there, she turned for help to her grandfather, who took her in, as did two uncles later on. Once she was living a more normal life, the details of which she skims over, Salcido began researching the story of the murders and got in touch with people familiar with the case. As part of her efforts to come to terms with her past, she contacted her father on death row in San Quentin; her attempts to understand him are genuinely moving.

Succeeds as a vivid reconstruction of a gruesome crime and the capture and trial of the murderer, but the appended memoir is sketchy.