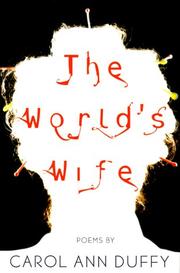 In her fifth volume of poetry, British poet Duffy presents to us the world of the liminal wife. Here we do not find annals of Victoria or Medea or Eleanor Roosevelt, but rather catch an imaginative glimpse into the lives of real and mythic women whose stories were not exactly their own: Mrs. Faust, Queen Herod, and Frau Freud, to name a few. Each of the 30 or so women featured in Duffy’s collection regales us with her side of her famous partner’s story, and the result is often insightful and always entertaining. Duffy’s verse is at once tight and resonant, her language colloquial and engaging, her rhymes refreshing. While a great strength of the volume is its thematic unity, these poems are better swallowed in short snatches, for the tone of the wife’s lament is often so consistent that the uniqueness of each woman’s plight gets debased. For instance, Mrs. Tiresias’s dilemma (“All I know is this: / he went out for his walk a man / and came home female”) differs quite a bit from Eurydice’s discomfort in hell (“the one place you’d think a girl would be safe / from the kind of a man who follows her round / writing poems”), yet they come to us in a strikingly similar voice. Reminiscent of Sexton’s Transformations (1971), these works take the plots of some classic tales and give them a wry, mod twist.

For lovers of myth, or just a good tell, this dark and darkly comic volume has much to offer.