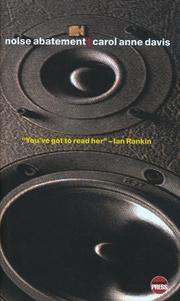 Every city-dweller on the planet has been driven to distraction by unwelcome noise from upstairs, but the three young Edinburgh professionals who live above Stephen and Caroline Day seem to belong in a class by themselves. Night and day Lewis, Kenny, and Jez blast music, play skittles, or drop heavy objects on their sanded hardwood floors. Requests for relief are met by a mere few hours' surcease (if they're backed by the majesty of the law) or an indifferent stare that has the Days at their wits' end. Caroline, an aromatherapist whose clients can't relax with all that din, has suffered a case of spastic colitis so severe that acquaintances think she's pregnant, and Stephen, who's lucky enough to have a dental practice to go to, has lost all ability to concentrate on his work. (A cruelly funny scene in which he's forced to remove an ailing patient's tooth while his mind is more clouded than the doped-up patient's suggests that sadistic Nazi dentists have nothing on their distracted colleagues.) In Davis's dark world, of course, nobody stands this sort of abuse for very long, and Stephen is soon plotting revenge. His escalating schemes, though, keep going horribly wrong.

Davis (Safe as Houses, 1999, etc.) tunes out the background hum of the city—and all but the sketchiest details of the noisemakers upstairs—to focus on the disintegration of her yuppie couple. In her hands, even the most banal problems turn into something unspeakable.