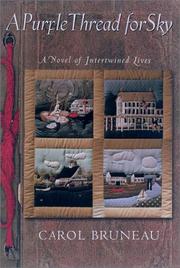 A PURPLE THREAD FOR SKY

A refreshingly unsentimental debut about three generations of women in a tiny Nova Scotia town.

Romantic immigrant Effie marries into the mercantile class. Ruby, her steely-edged elder daughter, weds a philandering businessman. As the narrative begins, Lindy, Effie’s granddaughter and Ruby’s niece, is a hapless spinster disguised as a woman, but she proves to be the story’s real heroine. The women’s voices alternate throughout, forming a surprisingly cohesive, if slightly predictable, tale of thwarted hopes, failed romances, and untimely deaths. Structured almost as a trio of linked stories, the novel’s conceit is at times alluring and involving, at times annoying. Just as we engage with one woman’s saga, short-story writer Bruneau (Depth Rapture, 1998, not reviewed) interjects another, creating a series of mini-cliffhangers that more than anything instill the desire to skip ahead. Wisely, she begins her tale at the end, with 60ish Lindy running the family business—once a general store, now more of convenience mart—and caring for 89-year-old Ruby, who appears to have Alzheimer’s. A wonderfully drawn character, Lindy is simultaneously saucy and meek, at odds with her own desires (to look pretty and perhaps attract a man) and frustrations (caring for Ruby, running the unprofitable shop, and fending off the evil teenagers who mock her). As the story progresses, she embarks on an uncertain romance with Wilf Jewkes, a trailer-dwelling construction foreman. Meanwhile, Ruby obsesses increasingly on the past, mentally dissecting her unhappy marriage and reading Effie’s diary, written in the form of a letter to her dead sister, which makes up the third narrative. The diary reveals Effie’s life as rather less utopian than Ruby imagined, a discovery that thrusts her into full-on dementia—seen, rather brilliantly, from Ruby’s point of view, as well as Lindy’s.

Deeply original in style, if not in substance.