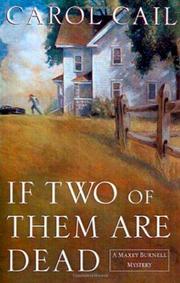 IF TWO OF THEM ARE DEAD

In her third appearance, amateur sleuth Maxey Burnell (Unsafe Keeping, 1995, etc.), editor of a Colorado weekly called Blatant Regard, proves that you can indeed go home again and even exorcise the ultimate Freudian nightmare: that your father might have killed your mother. This time out, Maxey, who's splitting with husband Reece, needs a change of scenery, and so she flies off to her old hometown in Nebraska to stay with Aunt Janet and cousin Curtis. The initial surprise is that uptight Janet is living with free spirit Scotty Springer. But surprises of a more unpleasant sort happen when Maxey noses around into the ten-year-old killing of her mother. Folks start getting very frosty when she asks about the unsolved case; then she discovers that her father Deon, whom she's thought long dead, is very much alive. And Janet saw him leaving the scene of that long-ago murder. Maxey visits him and is convinced, even when he seems wary and only guardedly affectionate, that he didn't do it. Her father seems eager, however, for her to leave the past undisturbed. But if he didn't do it, who did? An ex- lover of her mother's who wanted the affair kept secret? And what was the relationship between Mom and her childhood friend Sophie Otis? Something . . . irregular? Characters dominate, in a laid-back believable way, in a genre that's usually plot-driven. The result: a novel about small-town Americana that also satisfies as a whodunit.