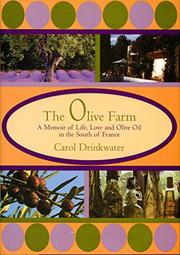 A Memoir of Life, Love and Olive Oil in the South of France

The memoirs of actress and author Drinkwater (Molly on the Run, 1996), best known for her role as Helen Herriot in the 1980s TV series All Creatures Great and Small.

Although the author plays down the importance of her life as an actress, it was through acting that she met her husband, Michel, a film producer. Leaving behind the tinsel of Cannes, the two wandered the back roads of southern France and found an abandoned villa attached to ten acres of old olive trees. The bucolic setting and the vision of themselves as custodians of the land led them to purchase the villa in one fell swoop, but real day-to-day life on the farm proved resistant to their romantic visions. The house hadn’t been lived in for years; simply establishing water and electricity service turned out to be a major job. Refurbishing an old swimming pool was an even more expensive (some might say prodigal) effort. In spite of her successful acting career, and her husband’s ongoing film projects, financial woes soon presented themselves—at least until money flowed in from one of the author’s residuals checks or Michel signed a new contract. Eventually the problems were solved and the grove was producing the finest olive oil in the region, mainly because of the Drinkwaters’ hard work, but even more because of their ability to hire the right people to help out—such as René (who knew just about everything there was to know about olives) and Quashia (an itinerant Algerian with a tragic past). In the end, not surprisingly, the story seems rather like a movie.

Peter Mayle fans who haven’t yet had enough of Provence knockoffs will enjoy Drinkwater’s genteel tale, as well as James Herriot groupies.