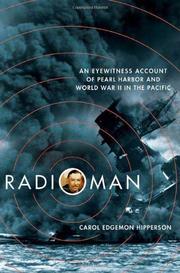 An Eyewitness Account of Pearl Harbor and WWII in the Pacific

A veteran remembers his small part in great events of the Pacific War.

Escaping a struggling Arkansas farm family, 16-year-old Ray Daves joined the Civilian Conservation Corps, and in 1939, after lying about his age, the Navy. During the next six years, advancing in rank at nearly every stop, he served as a radioman aboard many vessels and at a variety of land stations including Cold Bay and Kodiak, Ala., where he flew some search-and-destroy missions and observed the uneasy alliance between the Soviets and the Americans; Gulfport, Miss., where he celebrated V-J Day; and the Naval Research Laboratory in Washington, then hard at work on part of the Manhattan Project. The heart of this memoir, however, is his eyewitness report of combat, first at Pearl Harbor, where he suffered a shrapnel wound, and then at the Battles of the Coral Sea and Midway, where he survived the torpedoing of the Yorktown. For most of us, these signal events have been quietly committed to history. For Daves, the odor of burnt human flesh and the image of an onrushing Japanese pilot continue to haunt. Daves’s incident-filled career included brushes with fame—actor John Wayne, concert violinist Yehudi Menuhin, Admiral Chester Nimitz—and a prolonged and long-distance courtship of the girl to whom he remains married. A kind of one-man Rosencrantz and Guildenstern, Daves seems to understand and appreciate the minor role he played in momentous events. He still mourns the many friends lost in battle and, at this late stage in life, has finally been persuaded to speak in detail about his war. Hipperson (The Belly Gunner, 2001, etc.) smartly stays out of the way, basing her text on extensive interviews with her subject and adopting a first-person narration that permits Daves to emerge as the authentic voice and hero—a tag he would vigorously reject—of this straightforward, unassuming story.

Interesting, long-repressed tales from a humble man relieved not to “have to remember anymore.”