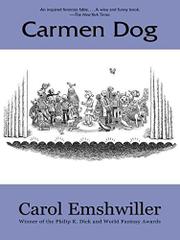 To do justice to both feminism and fantasy of a science-fiction variety in a novel with satirical ambitions is a gutsy endeavor--depending on our suspending more than the normal quota of disbelief. Short-story writer Emshwiller (Joy in Our Cause, 1974; Verging on the Pertinent, 1989) is witty, literate, and has a powerful imagination, but this first novel never gets it all together. At first when their wives and lovers begin to change, men have no objections. In fact, they look forward to the new sexual license offered by the half-animal-half-human creatures their women seem to be turning into. But as the human women are turning into animals and birds, female animals are undergoing their own metamorphosis--in the other direction. Pooch, the heroine and a setter of impeccable lineage, is turning into a beautiful young woman who, as her mistress rapidly changes into an inarticulate snapping turtle, takes over more and more of her household's chores. Her primary concern is the baby. Pooch is also an opera lover, whose great ambition is to sing the role of Carmen. When her mistress bites the baby, Pooch and baby flee to N.Y.C. There, caught and locked in the pound, she is taken away with the other inmates, all in similar states of change, by a scientist--""The Doctor""--who envisions not only a way of attaining scientific fame but a chance for sexually enjoying these new creatures. Pooch escapes, falls in love with a young man, and joins a group of female vigilantes out to protect these new women, all the while taking care of the baby, who is remarkably tolerant. Men, fearing the loss of motherhood and children, try to capture the leaders of the women--Pooch is a suspect--and at the same time set up ""Motherhood"" centers to replace what they have lost. Somehow, it all ends--happily at least for Pooch, who marries her young man and rears a handsome litter of setters. The story leaves the reader feeling as confused as the poor creatures it describes, and the point about the way men dominate women is equally lost in the swirl of fur, feather, and fin. Animal Farm or The Stepford Wives it is not.