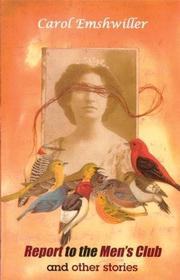 REPORT TO THE MEN’S CLUB

A daring, eccentric, and welcome observer of darkly human ways emerges from these 19 motley tales.

Often writing in an ironical first-person voice, storywriter and novelist Emshwiller (Leaping Man Hill, 1999, etc.) assumes the persona of the outsider or renegade who flees the community as if to test boundaries and possibilities. In “After All,” the narrator is a grandmother who decides to set out on a “makeshift journey” in her bathrobe and slippers simply because it is time. The setting is vague: she flaps through the town and then into the hills, pursued, she is sure, by her children, and, in the end, she is merely happy not “to miss all the funny things that might have happened later had the world lasted beyond me.” Both in “Foster Mother” and “Creature,” the mature, quirky narrators take on the care of an abandoned, otherworldly foundling and attempt to test their survival together in the wilds. In other stories, a character’s affection for a scarred pariah forces her out of her home and through a stormy transformation—as in the sensationally creepy “Mrs. Jones.” Of the two middle-aged spinster sisters, Cora and Janice, Janice is the fattish conspicuous one who decides to tame and civilize at her own peril the large batlike creature she finds wounded in the sisters’ apple orchard. Janice does get her husband, and through skillful details and use of irony, the story becomes a chilling, tender portrait of the sisters’ dependence and fragility. At her best, Emshwiller writes with a kind of sneaky precision by drawing in the reader with her sympathetic first person, then pulling out all recognizable indicators; elsewhere, as the long-winded “Venus Rising” (based on work by Elaine Morgan), the pieces read like way-far-out allegories.

A startling, strong fourth collection by this author—look for her upcoming The Mount.