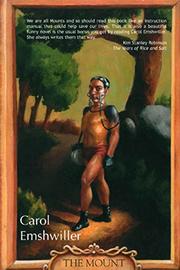 The revolt of the Houyhnhnms against the Yahoos forms the essential allegorical plot behind fantasist Emshwiller’s astutely crafted, occasionally maudlin latest, on the tail of her fourth story collection (Report to the Men’s Club, p. 901).

The Hoots are the controlling humans who train, administer treats—and also punishment by poling—to their intelligent, sensitive, enslaved Mounts. These are the Sams and Sues of various pedigree—the Seattles being the strongest and most supreme, followed by the swift-footed Tennessees. Yet an insurrection has upset the order of things, and through the first-person voice of the adolescent Smiley, also called Charley, who is the carefully groomed Seattle Mount of the loyal, half-grown Little Master (a.k.a. His Excellent Excellency About-To-Be-The-Ruler-Of-Us-All), we learn that the tamed Mounts have made a violent push for freedom. Suddenly thrust into the wilds with Little Master clinging to his neck, Charley hooks up with the sire he has never known, Beauty, who is the colossally scarred, intractable Seattle and leader of the Mounts’ revolt. Charley is wary of his gruff father, smarting at his inability to love Charley’s mother, Merry Mary, with whom Beauty was forced to mate without love and whom Charley is determined to find, although he never knew her either. Together, Charley, mounted by the clueless Hoot Little Master, Beauty, and Beauty’s kind Tennessee girlfriend Jane, tough it through the wilds and try to avoid recapture by the wily, fork-tongued Hoots. Emshwiller’s peculiar, touching tale becomes a meditation on the virtues of civilization (comforts, discipline, and the principles of conformity) versus freedom and democracy. Which does Charley prefer? In the end he opts for love—and not (gasp!)—for one of his own breed. With patience and enormous affection for her four-legged characters, Emshwiller has fashioned an affecting, plausible story that manages to sidestep a heavy-handed symbolism.

A deceptively simple, clear-eyed story that should find its sympathetic Gullivers.