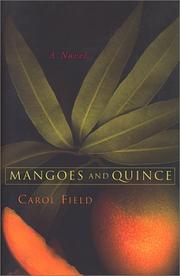 Cookbook-author Field debuts in fiction with a novel that stretches hard indeed so that things culinary can provide a metaphor of closure.

Australian Miranda is only 15 when she’s swept away by Anton Peeters, the 30-year-old and half-shady Dutch trader who wafts her off to the edenic East Indies for a life of open air, sex, sea, and new baby Diana—when, that is, he’s not away from “home” on his travels, which, Miranda discovers, are apparently involving more and more sex of odd kinds. With this knowledge, she insists that the family relocate to the relative orderliness of Anton’s old family home in Amsterdam, a grand but deeply faded mansion built on the tired foundations of Dutch empire. There, Miranda lives with Diana—whose favorite companion is her monkey, Majine—and with a mother-in-law who’s imperious toward Miranda but loving to her granddaughter. Soon Anton isn’t just at sea most of the time but has abandoned his family for keeps (to the sorrow of Diana, who—inexplicably to the reader—loves the ultra-sleazy guy madly) to form a sex-and-mysticism cult in the Indies, in something like a thinny-thin version of Conrad’s Kurtz. When Mother-in-Law dies back in Amsterdam, her will leaves the whole kit and kaboodle to Diana and only the kitchen pots and pans to Miranda. Embittering enough, but more immediately to the point is the state of poverty the pair find themselves in. What to do but start a restaurant? It quickly becomes the talk of all Amsterdam, so successful that . . . but wait: Will it be able to survive when something truly dreadful happens to the beautiful Miranda, overseeing spirit and culinary genius? Will plain-Jane daughter Diana ever stop mooning over her good-riddance father and step in to save the day, the family, the fortune?

Thin romantic silliness mainly, but good descriptions of the old manse in Amsterdam, and of the stuff Miranda cooks there.