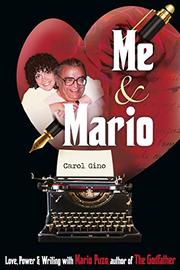 Love, Power & Writing with Mario Puzo, author of The Godfather

Gino recollects her 20-year romance with Mario Puzo, the author of The Godfather.

When author Gino (Where Dreams Come True, 2014, etc.) first met Mario Puzo, she was 37-years-old and ending her second marriage. Puzo was 58, and his wife of more than 30 years had just died. Neither was particularly ripe for a new romance, and the differences between them—Gino lightheartedly calls them the “Romantic Patriarch and the Radical Feminist”—made their intimate connection somehow improbable. But a deep connection flourished between them nonetheless, a touchingly authentic bond that lasted for 20 years, until Puzo’s death. Mario had written The Godfather 10 years before they met and had been catapulted into the rarified air of celebrity, a cosmos she initially found daunting. He also mentored her in the “carpentry of writing”—Gino had already taken some courses and a writing workshop and had authorial aspirations of her own. Much of the remembrance recounts captivating conversations between the author and Puzo, which provide an extraordinarily candid look at the man and his work. Gino was introduced to other literary luminaries like Joseph Heller and eventually became a successful author in her own right. At the heart of the memoir is the distance between Gino’s view of love and marriage and Puzo’s, which is built not around romantic passion but the dynamic interplay of power and equality. Puzo had said: “As soon as women find out what a rip off marriage is, they won’t even want it. It’s a thankless job” and an “archaic concept especially for an independent woman.” The author’s remembrance is a loving homage not only to an affectionate partner, but also an insightful, attentive teacher. Puzo’s discussions about his demanding craft, as well as the publishing industry, supply many of the book’s highlights. Gino is a natural storyteller—her style is effortlessly anecdotal, more charmingly informal than literarily polished. Her easy wit and openhandedness make for a delightful read, especially for those interested in the elusive mechanics of writing.