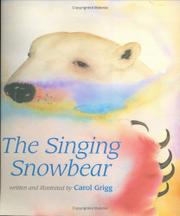 Grigg complements her first story for children with soft-edged, cool-hued watercolors that powerfully evoke the white-bound north. This tale of the polar Snowbear opens with a call to adventure, the summons of the mythic hero. This is a song of such haunting beauty that the young bear must follow it to its source, and so he does, leaving his mother and setting off across the ice floes. “Maybe I can make those sounds and fill myself with songs,” he tells his mother, to which she lovingly growls in a guardian-at-the-gate manner, “Bears don’t sing.” The hero cycle, as Joseph Campbell delineated it, is followed nearly exactly, from the lyrical opening and through the unfolding of Snowbear’s journey. Snowbear struggles through challenges, as his path is wracked with not only loneliness and uncertainty, but also with very real physical and emotional pain. When he finally finds the singer, a whale, it is trapped in ice from which Snowbear must rescue him. Readers will be primed for something special; delivered, instead, is a ditty of a whale mother’s song in which the two new friends begin to harmonize. This awakens all the Arctic to a stomping, swaying response that lasts until dawn, but isn’t captured on the page; the expected sense of triumph in the hero’s return never emerges. After giving themselves up to a story with such glorious underpinnings, readers will be disappointed by the ending. (Picture book. 4-8)