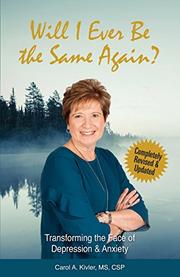 WILL I EVER BE THE SAME AGAIN?

Transforming the Face of Depression & Anxiety

An executive coach shares her intimate and informative experiences to help dispel the stigma of clinical depression and electroconvulsive therapy.

By her own admission, Kivler (Mental Health Recovery Boosters, 2013, etc.) had a “charmed life”—she had a loving family, both parents still living, a successful husband, and three children, with a nice house, a dream job, and financial stability. The first attack of “the Beast,” what she came to call her clinical depression, was in 1990. And despite her best efforts to pretend to be OK, numerous battles with the monster and the insomnia accompanying it led to a psychotic episode in which she attempted to convince her husband that he and the children should join her in suicide. While she was hospitalized, medication did little to ease her symptoms, causing her to accept electroconvulsive therapy, with no small amount of hesitancy due to its reputation. Kivler’s recovery after numerous sessions is the driving force behind the book, which seeks to confront the misinformation and notoriety attached to ECT. The author calls out antiquated depictions of ECT in movies like The Snake Pit and One Flew Over the Cuckoo’s Nest and recalls its barbaric past uses as “cures” for truancy or gay sexuality. The text skillfully walks readers through ECT’s process, starting with the administration of anesthesia and a muscle relaxant beforehand and sometimes talk therapy afterward; the difference between unilateral, bilateral, and brief pulse stimulus treatments; and the side effects, ranging from headaches to memory loss, though the book is light on statistics regarding their frequency or relapse. Utilizing a proprietary “Courageous Recovery Wellness Model” that stresses awareness, acceptance, and continued commitment to health, the volume confronts falsehoods about ECT and clinical depression head on with useful self-care tips and checklists for identifying symptoms. Versions of this model are included not just for consumers, but also caregivers and health professionals. Kivler’s writing is thrifty but surprisingly artful, particularly when speaking about her own experiences. Early on, she sets the scene of a hospital lockdown ward that could have been “on another planet,” a place where “we all lost our ability to walk normally. Feet never really left the ground as we slowly scuffed our way through the halls.”

A vivid and personal story that turns into an enthusiastic advocacy for electroconvulsive therapy.