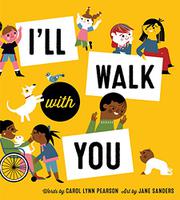 I'LL WALK WITH YOU

Drawing on lyrics from her Mormon children’s hymn of the same title, Pearson explores diversity and acceptance in a more secular context.

Addressing people of varying ages, races, origins, and abilities in forced rhymes that omit the original version’s references to Jesus, various speakers describe how they—unlike “some people”—will “show [their] love for” their fellow humans. “If you don’t talk as most people do / some people talk and laugh at you,” a child tells a tongue-tied classmate. “But I won’t! / I won’t! / I’ll talk with you / and giggle too. / That’s how I’ll show my love for you.” Unfortunately, many speakers’ actions feel vague and rather patronizing even as they aim to include and reassure. “I know you bring such interesting things,” a wheelchair user says, welcoming a family “born far, far away” who arrives at the airport; the adults wear Islamic clothing. As pink- and brown-skinned worshipers join a solitary brown-skinned person who somehow “[doesn’t] pray as some people pray” on a church pew, a smiling, pink-skinned worshiper’s declaration that “we’re all, I see, one family” raises echoes of the problematic assertion, “I don’t see color.” The speakers’ exclamations of “But I won’t!” after noting others’ prejudiced behavior reads more as self-congratulation than promise of inclusion. Sanders’ geometric, doll-like human figures are cheery but stiff, and the text’s bold, uppercase typeface switches jarringly to cursive for the refrain, “That’s how I’ll show my love for you.” Characters’ complexions include paper-white, yellow, pink, and brown.

An unfortunately simplistic delivery of a well-intentioned message.