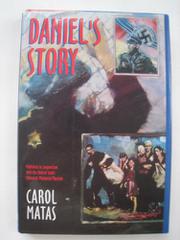 After witnessing the rising tide of anti-Semitism in Nazi Germany, Daniel is suddenly transported, at age 14, from his comfortable life in Frankfurt to a Polish ghetto, then to Auschwitz and Buchenwald—losing most of his family along the way, seeing Nazi brutality of both the casual and the calculated kind, and recording atrocities with a smuggled camera (``What has happened to me?...Who am I? Where am I going?''). Matas, explicating an exhibit of photos and other materials at the new United States Holocaust Memorial Museum, creates a convincing composite youth and experience—fictional but carefully based on survivors' accounts. It's a savage story with no attempt to soften the culpability of the German people; Daniel's profound anger is easier to understand than is his father's compassion or his sister's plea to ``chose love. Always choose love.'' Daniel survives to be reunited, after the war, with his wife-to-be, but his dying friend's last word echoes beyond the happy ending: ``Remember...'' An unusual undertaking, effectively carried out. Chronology; glossary. (Fiction. 11-14)