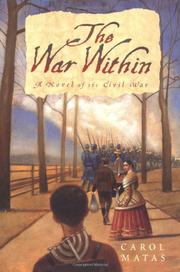 A Novel of the Civil War

Presented as the first-person diary of Hannah Green, 13, during the months of December and January 1862–63, a recounting of what happens to the only Jewish family in Holly Springs, Mississippi, when they were forced to leave. Ulysses Grant, preparing for the second siege of Vicksburg, issued General Order #11, which evacuated Jews from the territory under his command because he wrongly considered all to be profiteers. (President Lincoln soon overturned the order.) As the family, which supports the cause of the Confederacy and also holds slaves, flees, Hannah begins to comprehend that Jews are being treated in the same way as African-Americans and she starts to develop some understanding and sympathy for those to whom she had always felt superior. But Matas’s work of historical fiction doesn’t read like the diary of a girl; rather, it is the work of an author who never finds the right voice for the cardboard characters, especially the unsympathetic Hannah (who endlessly reminds the reader that she is a “Southern lady”) and some of the stereotyped “Yankees” and “Rebs.” Although the history is accurate, the book is turgid and off-putting. (Historical fiction. 10-14)