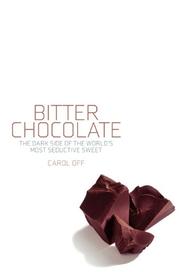 The Dark Side of the World’s Most Seductive Sweet

The compelling untold story of a universal luxury that is unattainable to the very people who provide its most essential ingredient.

Most of the world’s chocolate is produced in some of the least stable, most impoverished places in the world—places like Côte d’Ivoire, Africa, which for 15 years has been in near-constant political upheaval. Harvesting and processing cocoa pods is backbreaking, dangerous labor in a region roiled by ethnic cleansing and in some areas civil war. The workers who get paid at all lose much of their meager wages to government “fees” that amount to state-sanctioned bribery—and they’re the lucky ones. The unlucky ones are nothing less than modern-day slaves, many of them children “hired” through brokers and forced to work long hours for no pay and little or no food. But chocolate consumption has always relied on exploitation, argues Off (The Ghosts of Medak Pocket: The Story of Canada’s Secret War, 2004, etc.): from Meso-American times, when slaves harvested and mashed cocoa pods to make a bitter drink for their masters, to the colonial era, when European slave merchants traded African workers to cocoa plantations. The chocolate industry has been aware of slave labor in cocoa production since at least the 19th century, she writes, but almost no progress has been made in wiping it out. Congress has rejected efforts to institute a “slave free” labeling system, preferring a voluntary system that, Off contends, has no teeth. So-called “fair trade” chocolate is no panacea either, as a growing number of small chocolate companies have been taken over by the very multinationals to which they were supposed to provide alternatives.

Offers only vexing problems, not solutions, but does so with clarity, conviction and outrage.