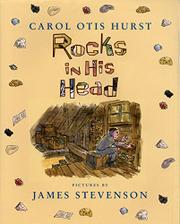 ROCKS IN HIS HEAD

A big-hearted true story of a man with rocks in his head (and in his pocket), nourished by the deep humanity in Stevenson’s watercolors. Hurst’s father was a rock hound. His mineralogical thrall started in childhood and he just couldn’t collect enough rocks. People said he had rocks in his head: “Maybe I have,” he said. “Maybe I have.” But he had to earn a living and to that end he ran a filling station, which did good business, and he kept his rock collection on the back shelves of the service bay. Then the Depression cut that business down, so the family moved to a ramshackle old house that her father had to fix up, but not before settling his rock collection up in the attic. He worked at odd jobs as he could find them, but on rainy days when he could find no work, he’d go to the science museum to look at their rock collection. One day the director of the museum has a chat with him, goes home with him to see his collection, and offers him a job as the night janitor, which leads ultimately to a curatorship in mineralogy. The purity of her father’s passion for rocks gives this story enormous power; he’s not expecting to make a buck off them, he’s just happy to be in their elemental presence. And through good time and bad, he’s like one of them—a real rock—to his family. (Picture book. 5-9)