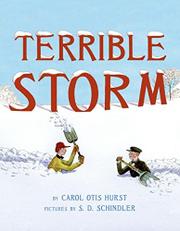 Remember the blizzard of 1888? Probably not, but the narrator’s two grandpas sure do. Depending on whether you ask Grandpa Walt, who loves to be around people, or Grandpa Fred, who’s a bit shy, they’ll both tell you it was the worst storm ever, but each for a different reason. When the unexpected storm hit, Grandpa Walt was chopping firewood and Grandpa Fred was delivering milk. The snow was so deep they had to take cover. Sociable Walt found refuge in a barn, stuck for three days with only a horse, chickens and cats. Shy Fred got trapped for three days in the White Horse Inn full of people. As they reminisce, the watercolor-and-ink illustrations add humorous nuances with historical details and personality traits. Clever formatting of the text places one line between two panels, above for Walt and below for Fred, juxtaposing each one’s “survival.” Kids may need to flip pages to keep the grandpas straight (a beard is key), but that won’t detract from the fun. The author’s note cites that the story is based on her own grandfathers’ experiences. Great for sharing and storytelling. (Picture book. 5-8)