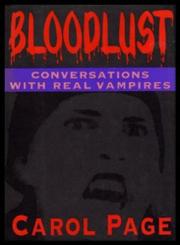 A survey of honest-to-goodness human bloodsuckers that manages to buffer sensationalism with sympathy. Through historical research, anecdotes, and interviews, free- lance journalist Page (Cosmopolitan, Omni, etc.) celebrates ``the decade of the vampire'' and the impact of the vampire image on popular culture from cereal shapes, novels, movies, and fashions to rock music, pornography, and political cartoons. While admitting that the vampire mystique is ``about sex and power,'' she tries to debunk the myth by portraying her subjects as needy and lonely souls whose craving for blood or obsession with those who crave it are not much different from such other emotional maladies as manic- depression or eating disorders. Among her subjects: a gay vampire who ``drinks other people's blood to get to know and understand them better''; a vampire hunter who claims to be a distant grandson of Lord Byron; and a young man convicted of murdering a woman whom he perceived to be his blood-sucking grandmother. Without getting too mired in theories or details, Page also discusses African blood-drinking rituals, a London ``Dracula Society'' that stages a ``Hunt-A-Vampire Weekend,'' the influence of the 60's soap opera Dark Shadows, and a Fox-TV vampire special in which facts apparently were egregiously fudged. She also draws a hilarious comparison between Vlad Tepes—the infamous Romanian prince on whom Bram Stoker's Dracula is supposedly based—and Romania's toppled dictator Ceausescu. Avoiding the lurid gush of Norine Dresser's American Vampires (1989), Page entertains, informs, and even inspires the cause for ``Vampire's Rights'' without draining too much out of us.