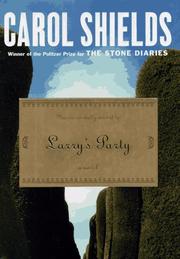 A meticulous coming-of-(middle)-age novel by Pulitzer Prize- winner Shields (The Stone Diaries, 1993, etc.), who seems to have mastered the art of understatement without falling into the bottomless pit of obscurity. Larry Weller, the son of English immigrants, is brought to Winnipeg while still in his mother's womb. He grows up to become a floral arranger and landscape gardener. As the story opens in 1977, Larry is 26, living at home and dating Dorrie, whom he eventually marries. The book progresses episodically across the next 20 years, each chapter self-contained enough to work as an independent story but connected to the ones that precede and follow it by the narrative of Larry's life, which runs through them like the string holding together a necklace of pearls. Thus, while the focus of each chapter is minuscule—a tweed jacket picked up by mistake in a restaurant, for example, or a trip to the airport to meet a small child—the cumulative effect is one of exceptional clarity and depth of emotion, since the larger environment that surrounds ordinary daily routines becomes better defined and more obvious as the story progresses. The unhappy circumstances that led to the Wellers' emigration, the failure of Larry's marriage to Dorrie, the trials of his second marriage, and the development of his career as a landscaper are all described through flashback. Each part is carefully related to the central metaphor of the garden mazes that Larry becomes expert at designing. The climactic chapter, in which the characters of Larry's labyrinthine and exceedingly complicated life come together at a party, is a blatantly contrived device—but successful in spite of its transparency. Very fine and real: Shields writes with the rare self- assurance of one who from the first knows where her characters are going and what will become of them once they arrive, and—rarer still—manages not to bend them out of shape along the way. (Book- of-the-Month Club selection; author tour)