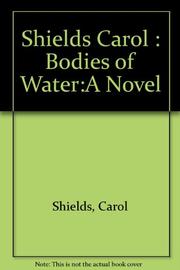 THE REPUBLIC OF LOVE

Canadian Shields (The Orange Soul, Swann, etc.) is mostly a miniaturist, but in this clever, erudite novel she adapts her metaphorical bons mots to a larger landscape, wherein a lovelorn folklorist who studies mermaids and a late-night talk-show host three times divorced find each other. The two middle-aged protagonists, who live in Winnipeg, meet about midway through the story—until that point, chapters alternate between Fay (with her mermaids, her seemingly happy parents, and her 65-year-old godmother Onion) and Tom (``This business of being a guy, it never lets up''). The structure allows Shields a good deal of fun—Tom, for instance, attends a lecture on ``The Ghettoization of the Single in Contemporary Urban Society''- -but also allows her to chronicle, with the lightest of touches, the usual midlife tragedies in both lives: an acquaintance of Tom's falls down dead; Fay spends her first few chapters breaking up with a man she no longer loves before planning a research trip to Europe. When the two meet, bells ring. They both come alive to the erotic nature of the world and urban life, and Shields chronicles the initial infatuation, and the subsequent engagement, with an understated lyrical touch: ``The smell of food fattened the air.'' She is always an ironist, however, and her lovers do not find happiness so easily: ``Belief, Fay knows, is sometimes perverse.'' After she receives a bottle of urine as an engagement present (Tom has much earlier received a package of excrement) and leaves Tom to stay with her mother after her father leaves, she calls off the wedding. But all's well that ends well—in this case with marriage and happiness. Shields again displays a comic touch that is at once satirical and touching: a familiar story given an original treatment and a western Canadian setting.