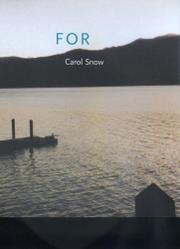 Snow, who lives in San Francisco, won the Book Award from the Poetry Center at San Francisco State University in 1990 for Artist and Model, her first collection of poetry. She also received a NEA Fellowship. Here (in the first volume of the New California Poetry series) she sets herself the task of the ages in trying to describe what it means to stand within a small fragment of time, attempting to make sense of the whirlwind of impressions, past and present, that descend upon one in a moment of quiet. She layers her images, shifts the figure and ground, interposes scenes from memory with the reality at hand, and subtly merges or shifts the relationship between the observer and the observed. In some respects these are ``thought experiments,'' and, as in all laboratory situations, not all results are successful. Sometimes the thoughts obtrude. Her insistence upon aesthetic exactness is wearing at times, as when her favorite parenthetical expression, ``(somehow),'' is continually repeated. Yet she posits an interesting ekphrasis (describing a work of art in verse) of two photographs of a thematicallylinked painting and sculpture. Her poems are often visually spare and striking, as in her description of a Henry Moore sculpture of ``a woman's body, reclining, curved: eloquent as bone, shell, stones worn beyond contradiction.'' Snow is most successful when her space is circumscribed, when she limits herself to defining a single moment, with all its attendant sensations, thoughts, and memories.

She is least poetic and most didactic when performing her syntactic legerdemain.