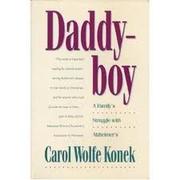 A daughter's moving recollections of her father, a ``model of dedication to the life of the mind,'' who ``day by day, cell by cell, loses his mind.'' Konek alternates her account of her father's slow death from Alzheimer's disease with vivid, sometimes painful, memories of her childhood in a home where a strict father, who ``controlled every aspect of his being and of ours,'' held her to singularly high standards of performance. She adored him and sought his love and approval—but she also hated and feared him. As he slowly disintegrates mentally and physically, though, she comes to understand and accept him. Although Konek's father is the focus and the immediate victim, the author's concern here is not simply the calamitous effect of Alzheimer's on him, but rather the havoc it wreaks on the whole family. Alzheimer's is truly a family disease, isolating care-givers, inflicting guilt, turning order into chaos. It traps Konek's mother for years ``with a dead man in a live body,'' leaving her vulnerable to con artists who take all her money, even her house. Occasional memory lapses take on ominous significance for Konek, who begins to imagine signs of the disease in herself. Finally, the family struggles with the most difficult question facing families when one member's approaching death is slow and painful but inevitable: Are we obligated to maintain life, or to allow death? Alzheimer's affects millions of men and women and their families. Konek's book will not bring them cheer, but it offers the significant comfort of a shared experience thoughtfully considered and beautifully described.