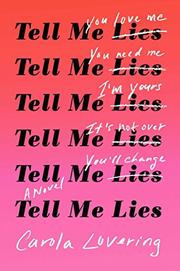 Passion, friendship, heartbreak, and forgiveness ring true in Lovering's debut, the tale of a young woman's obsession with a man who's "good at being charming."

Long Island native Lucy Albright, starts her freshman year at Baird College in Southern California, intending to study English and journalism and become a travel writer. Stephen DeMarco, an upperclassman, is a political science major who plans to become a lawyer. Soon after they meet, Lucy tells Stephen an intensely personal story about the Unforgivable Thing, a betrayal that turned Lucy against her mother. Stephen pretends to listen to Lucy's painful disclosure, but all his thoughts are about her exposed black bra strap and her nipples pressing against her thin cotton T-shirt. It doesn't take Lucy long to realize Stephen's a "manipulative jerk" and she is "beyond pathetic" in her desire for him, but their lives are now intertwined. Their story takes seven years to unfold, but it's a fast-paced ride through hookups, breakups, and infidelities fueled by alcohol and cocaine and with oodles of sizzling sexual tension. "Lucy was an itch, a song stuck in your head or a movie you need to rewatch or a food you suddenly crave," Stephen says in one of his point-of-view chapters, which alternate with Lucy's. The ending is perfect, as Lucy figures out the dark secret Stephen has kept hidden and learns the difference between lustful addiction and mature love.

There are unforgettable beauties in this very sexy story.