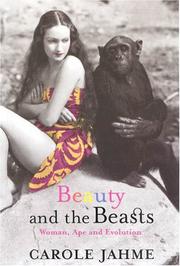 BEAUTY AND THE BEASTS

An examination of the extraordinary contributions of female primatologists to the advancement of the field, from primatologist and documentary filmmaker Jahme.

In what is primarily a survey of primate research, Jahme asks the question: Why is it that the best of that research (behavioral ecology in particular) has been conducted by women? It is not the first time that the question has been posed. The author touches briefly upon some conjectures—that women are drawn to primates in search of a lost innocence, for example, or a basic simplicity—but feels most at ease with the notion that women have a facility for communicating telepathically (what the French call complicité) with non-human primates, as a mother would with a child, wordlessly and preternaturally. Jahme then settles comfortably into her overview (with some fine individual portraits) of the women who have undertaken such risky and, in their hands, rewarding work. The research of Jane Goodall, Dian Fossey, and Birute Galdikas is given detailed coverage, but what is of particular value in this account is the exposure given to other women in the field. Examples include Jeanne Altman’s standards of field research and Thelma Rowell’s study of the baboon’s peaceful matriarchy; Umeyo Mori’s research into the social development of the macaques and Mariko Hirawa-Hasegawa’s coercive sex studies; Sarah Hrdy’s sexual-behavior observations and Devendra Singh’s remarkable work regarding beauty and proportion. Jahme also investigates the history of women and apes in film, and forays into verbal communication with primates, among other topics. She also looks at one of the most awkward challenges faced by women in the field: “They fear that if their science becomes known as a ‘female vocation’ their work will be diminished within the world of science, which is still male dominated and inherently chauvinistic.”

A fine reference and research tool, written with a gracefulness that belies its thoroughness.