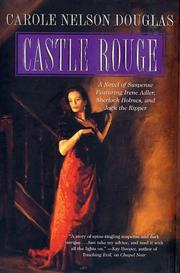 Plying the Sherlockian canon once again (Chapel Noir, 2001, etc.), Douglas sets The Woman, Irene Adler, to solve the case that is most baffling to Holmes: Who is Jack the Ripper? Moreover, is this fiend also responsible for the disappearance of Irene’s husband, barrister Godfrey Norton, last seen entering a Transylvanian castle on a mission for Baron Rothschild, and the abduction from the Paris streets of her secretary, the prim Penelope Huxleigh, as well? Nellie “Pink” Bly, intrepid girl reporter, and Quentin Stanhope, dashing secret service agent, will follow along as Irene links up the Whitechapel murders to similar outrages in Paris and Prague and tracks the whereabouts of demented upholsterer James Kelly, the most likely suspect—although Bram Stoker also comes under scrutiny until he too winds up tethered in that Transylvanian castle, where Holmes’s old nemesis Colonel Moran and his minions, including a young Rasputin, are conducting arcane and licentious religious rites in the dungeon. It will be up to a violin-playing gypsy (Guess Who in disguise) to effect a rescue, although it is Irene who spots the relevance of the bloody Chi-Rho symbol strewn about and concludes the Ripper case with an a capella rendition of “Amazing Grace.”

A bit too much relish in relating the anti-Semitism of the day, and a few too many bit actors (those Bohemian royals, Wild Bill, etc., etc.), but Prague is a captivating city and it’s fun to watch the very Victorian Miss Huxleigh finally let her hair down.