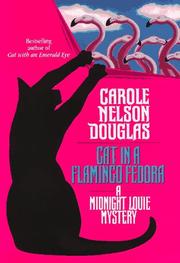 CAT IN A FLAMINGO FEDORA

The seventh chapter in the seemingly endless saga of Midnight Louie, the self-adoring cat who lives with Las Vegas p.r., sometimes p.i., woman Temple Barr (Cat with an Emerald Eye, 1996, etc.). This time, Temple is busy promoting artist Domingo's installation of a million plastic flamingos all over town and supervising Louie's performance in a TV cat-food commercial. Louie's costar is the love of his life, Yvette, owned by hyper has- been actress Savannah Ashleigh. Meanwhile, Temple's own emotional life is complicated by fuzzy attachments to the temporarily vanished magician Max Kinsella and to ex-priest Matt Devine, presently working the suicide watch on a local hotline. In a chance encounter, Temple meets aging star act Darren Cooke, as famous for his sex life as for his stage career. He wants advice on the anonymous letters he's been getting from a woman claiming to be his daughter. Soon after, Cooke is found shot to death in his penthouse suite and declared a suicide. But Temple has her doubts, and Matt wonders whether Cooke was the persistent caller on his hotline who repeatedly said he was a famous person. As his mistress starts nosing into Cooke's affairs, carefully keeping out of the way of Police Lt. Molina, Louie is having his own problems on the set- -plagued by longtime enemy Maurice and frustrated in his play for Yvette. The whole unlikely mess is eventually resolved at inordinate length, with a melodramatic confession from an unexpected source. Masses of inane cat chat and psychobabble, convoluted plotting, and showy but dull characters: strictly for Louie fans and lovers of the frenetic Las Vegas scene, rendered here in all its tacky detail.