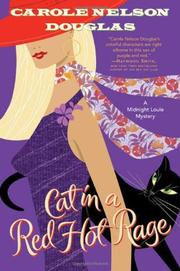 CAT IN A RED HOT RAGE

When the Red Hat Society holds its convention in Las Vegas, murder is an uninvited guest.

Noir cat Midnight Louie and his housemate, Temple Barr, are knee-deep in red, purple and murder. Temple’s landlady Electra Lark becomes a suspect when a strangled Red Hat lady turns out to be her ex-husband’s ex-wife. So Temple dons the pink of the younger Red Hat set and goes undercover at the convention. Though she’s just become unofficially engaged to ex-priest and radio-show host Matt Devine, she’s still attached to her vanished ex-lover, magician/secret agent Max Kinsella, and wants to reveal her engagement up-close and personal. Meanwhile, Midnight Louie’s daughter, Midnight Louise, has taken over the duties of house detective at the incredibly sexy Fontana brothers’ Crystal Phoenix hotel, the convention headquarters. Staking out Max’s empty home, Louise witnesses a murder attempt on Lt. Molina, who, convinced Max has been stalking her, is still hot on his trail. As the hotel’s flack, Temple has access to all the goings-on. When her Aunt Kit, who’s dating a Fontana, almost becomes the next victim, the Fontana brothers pitch in to help close the case.

Catnip for Louie’s devoted fans, though the unwary who haven’t read his first 17 adventures (Cat in a Quicksilver Caper, 2006, etc.) will struggle to make sense of the relationships in this convoluted tale.