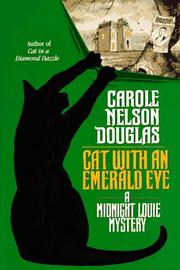 CAT WITH AN EMERALD EYE

This sixth Midnight Louie outing from the alarmingly prolific Douglas (Cat in a Diamond Dazzle, p. 406, etc.) sends Las Vegas p.r. woman Temple Barr—a well-dressed but faceless heroine—into the world of psychics. Her assignment? To get ideas for Halloween promotions by sitting in on an all-star sÇance—intended to raise the ghost of Harry Houdini—at the Hell-o-ween Haunted Homestead. Death intrudes, of course: When psychic Edwina Mayfair expires mid- sÇance, ``she'' is revealed to be Gandolph the Great, a magician dedicated to exposing phony supernaturalists. So, before the yawn- inspiring denouement (another sÇance), Temple interviews each of the psychic-suspects—while being torn between old boyfriend Max (the magician) and new quasi-boyfriend Matt (the ex-priest). And, throughout, Douglas intersperses chapters wherein Temple's cat Louie does his own murder/psychic investigations, meets the ghost of commercialdom's Maurice the Cat (murdered by his body double), and jabbers away in his unbearably verbose, slangy style. Padded out with lots of Houdini lore and related name-dropping (Orson Welles, Conan Doyle): for Louis loyalists only, or psi devotees who can tolerate the rampant cutesiness.