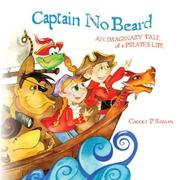 An Imaginary Tale of a Pirate's Life

Debut author Roman pens a picture book about an imaginative boy who transforms his bed and stuffed animals into props for a marvelous pirate adventure.

Roman draws the reader in from the first page with illustrations that are cheerful and clever. The story showcases a young pirate and his menagerie: cousin Hallie, a first mate who sports a purple bandanna and ruffled pirate shirt; Linus, the loudmouthed but scaredy-cat lion with a braided goatee; Fribbet, the floppy frog with an audacious red pirate hat; and Mongo, the mast-climbing monkey who charms with an eye patch and endearingly oversized lips. Roman deftly creates an appealing visual experience with engaging, bright illustrations that will appeal to young readers. The characters are rich with animated expressions and personalities that showcase the creative and warmhearted ways the characters have fun. Well-drafted secondary characters also include the “mermaid” who appears with a plate of golden doubloons (in the form of cookies) and orders the pirate not to get crumbs on the bed when eating them. The text has a lovely intonation when read aloud, and the simple, understandable story also carries a more complex, clever subtext that will allow for educational discussions. The captain’s constant good-natured lament that “being a captain is hard work”—as he watches his crew do all the actual labor—is hilarious and a pleasant opportunity to teach children about the nuances of words and their layers of meaning. The author’s adept use of genuine pirate terms—“swab the decks,” “pump the bilges” and “me hearties”—adds flavor and authenticity to the story, too. The captain and his crew sit down with a dictionary to figure out what “shiver me timbers” means, and then they take great delight upon using the phrase correctly; children will, too.

Roman charms with an imaginative, whimsical picture book that will entertain even the oldest pirates.