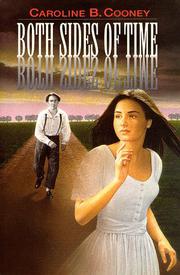 BOTH SIDES OF TIME

by Caroline B. Cooney

In Annie's opinion, the 1990s are seriously lacking in romance. Her boyfriend pays more attention to old cars than to her, while her father is having an affair right under her mother's nose. When Annie wishes she had lived a hundred years ago, she gets it, falling out of her century and into the 1890s, in a mansion replete with elegant ball gowns, sparkling mirrors, and a handsome young man who falls in love with her on sight. First of all, Cooney (Driver's Ed, 1994, etc.), usually such a pro on the specifics, weakens this time travel with inattention to detail. For example, she never describes Annie's bicycle (or that of her 1890s lover). Surely Annie's has gears; why doesn't anyone notice? Failure to mention it rings false with readers. Second, Annie describes herself as being good at "silly and frivolous.'' A better description might be self-centered and shallow. In both centuries she's chiefly interested in clothes, hair, and boys, and she breaks hearts past and present. Toward the end of the book she begins to look beyond herself, making a second trip to the past to prevent a miscarriage of justice, but for readers, it's too little, too late. She deserves everything she gets. (Fiction. 12+)