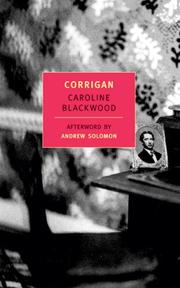 The life-enhancing, restorative con-man--generous despite his fakery, a giver of much-needed love and confidence--is a familiar figure in Anglo-American storytelling, from Dickens to Twain to The Music Man. And here, though Blackwood (The Stepdaughter, Great Granny Webster) stylishly fleshes out the basic tale with ironic charm and some shrewd psychology, she eventually returns to the usual formula--complete with an O. Henry-ish windup of sentimental revelations. Devina Blunt, still grieving over the death of her beloved colonel-husband, has sunk into a life of gloomy idleness and near-invalidism in her lovely little country house. Her daughter Nadine, a very rare visitor and the unhappy wife of a selfish London journalist, has felt ""totally defeated and frustrated by her inability to alleviate her mother's suffering."" (She also feels long-standing anger and jealousy about her parents' all-consuming mutual devotion.) But then timid Mrs. Blunt gets a visit from handsome, articulate, passionate Corrigan--an Irishman in a wheelchair who delivers an eloquent fundraising pitch for St. Crispin's, an under-equipped London hospital for the disabled. Corrigan makes Mrs. Blunt feel ashamed of her defeatist sloth; he urges her to become a pen-pal for a depressed St. Crispin's inmate; soon she's reawakening to life--learning to drive, turning her overgrown garden into a vegetable-farm, singing songs and reciting poetry with Corrigan. . . who has by now taken up disabled residence on Mrs. Blunt's renovated ground floor. But daughter Nadine, of course, is horrified by her mother's new domestic setup, by charismatic Corrigan's possessive power over Mrs. Blunt. So, after the now-happy widow dies of a heart attack, Nadine goes looking for the vanished Corrigan--discovering that he and St. Crispin's are utter frauds, that her mother knew the truth all along. . . and that she herself might benefit from some of Corrigan's liberating influence. (Says Nadine's model-friend Sabrina, another Corrigan convert: ""What he gave her was priceless. Does it really matter that he never had a hospital, just as long as she got such great pleasure from working for it?"") Most readers will catch on to Corrigan's scare from the start; many will find blatant implausibilities in its elaborate details. But, though creaky as suspense and predictably syrupy at the fadeout, this scenario gives Blackwood the opportunity to dish up more than a few fine scenes of gentle-humored dialogue, edgy domestic confrontation, and wryly detached observation in the British manner.