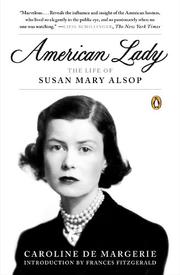 The Life of Susan Mary Alsop

An engagingly restrained portrait of an aristocratic woman whose marriages propelled her post–World War II political reach and literary accomplishments.

Descendant of the early American diplomat John Jay, Susan Mary (1918–2004), as she was always known, employed all the trappings of her privileged upbringing to create a purposeful, useful career. Raised largely abroad, as her father served as a diplomat around the world, Susan Mary demonstrated serious inquisitiveness at an early age and chose the men in her life with an eye to their power and influence. Her first husband, William Patten, served as economic analyst at the U.S. Embassy in Paris from 1945 to 1960, thus allowing Susan Mary a rare entrée into the difficult, exciting postwar remaking of Europe. There, she met Duff Cooper, British ambassador to Paris, who became her lover and fathered her first child. After Patten’s death, she married Joe Alsop, the influential editorial writer for the New York Herald Tribune, intimate of JFK and homosexual (Alsop told her outright), with whom she set up her formidable salon in Georgetown. Thin, fashionable, well informed, yet a little wicked, Susan Mary had what it took to be talked about, and the Alsops’ gatherings were the talk of Georgetown’s “glory years.” Eventually, Alsop’s rabid defense of the Vietnam War estranged many, including his wife, and they separated. In her mature years, Susan Mary achieved literary success with her published letters to longtime friend Marietta Tree. Paris-based author de Margerie paints in bold, bright outlines the compelling story of this Jamesian heroine.

Entertaining story of a dynamic literary woman who sparked a fascinating life from the changing currents of the age.