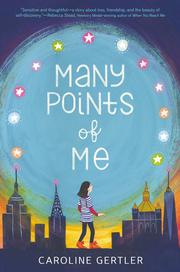 MANY POINTS OF ME

After her father’s death, an 11-year-old girl struggles to find her true self.

Georgia, the daughter of a famous artist, and her lifelong best friend, Theo, live in the same Upper West Side apartment building. Georgia and Theo used to draw with her father after school, but now Georgia’s unable to draw the way she wants. Increasingly resentful of the close relationship Theo had with her father, Georgia pulls away from their predictable friendship and becomes friends with a new girl at school. Expected to enter a citywide student art contest, she eschews tackling the required self-portrait. Discovering a drawing her father made of her before his death with markings suggesting he intended it to become part of an important series, Georgia keeps it secret. But when Theo finds the drawing and misguidedly submits it to the contest for her, Georgia must find a way to recover it, preserve her father’s legacy, and prove she’s more than just her dead father’s daughter. Georgia’s genuine, first-person narration exposes her loss, jealousy, guilt, and gradual realization that “all the different parts of me have been put back together in a new way.” Repeated use of the self-portrait device reinforces the self-awareness theme while relevant material on art and artists adds background depth. Main characters default to White; there is ethnic diversity in the supporting cast.

A realistic, poignant exploration of loss, friendship, and self-discovery with appeal to budding artists.