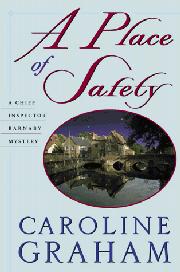 A PLACE OF SAFETY

Another gem in the diadem of Graham’s tales, set in the English village of Ferne Basset (Faithful Unto Death, 1998, etc.)—territory covered by Inspector Tom Barnaby and his sensitive but cloddish Sergeant Gavin Troy. The village has been shaken by the discovery, deep in the woods, of the strangled body of old Charlie Leathers. Charlie did odd jobs for several of the villagers, among them writer Valentine Fainlight and his sister Louise, who live in an architect’s dream of a glass house next to Lionel and Ann Lawrence. Lionel, once a practicing vicar, now devotes himself to saving hopelessly errant young people. One is handsome, corrupt young Jax, who lives over the Lawrence garage—a magnet to Valentine, anathema to Louise and Ann. Another is teenager Carlotta. After living with the Lawrences for a time, Carlotta has disappeared after a quarrel with Ann, who now finds herself a blackmail target. Barnaby and Troy, getting nowhere with the Leathers killing, turn their attention to Carlotta, tracking her to London, where they meet her friend Tanya Walker but find no trace of their quarry. Meantime, Ann Lawrence decides to ignore the blackmailer and leave her loveless marriage, only to become the victim of a savage attack that leaves her near death. It takes another actual death before secret lives are uncovered and loose ends neatly tied, allowing Barnaby to celebrate, somewhat ambivalently, his 25th wedding anniversary. The author’s sharp characters and complex but believable plotting are in full play here, to the reader’s delight.