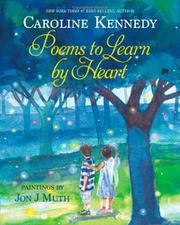 POEMS TO LEARN BY HEART

A gorgeous collection of poems selected with commitment to memory in mind.

Though the author of a few best-sellers on such adult topics as politics and constitutional law, Kennedy continues to carve a name for herself as an anthologist. She teams up here again with Caldecott Honoree Jon J Muth (A Family of Poems, 2005) to present over 100 poems and accompanying illustrations aimed at introducing children to the pleasures of memorization. Unlike other contemporary anthologies with similar ambitions, whose forgettable contents seem picked out of a hat, Kennedy’s selection radiates diversity with purpose. Grouped thematically on popular verse topics—the self, nature, war, family, friendship, etc.—each of the collection’s works offers a distinctive place of attachment for readers. Light, early-20th-century pieces like A.A. Milne’s “Disobedience” and Ogden Nash’s “The Parent” (“Children aren’t happy with nothing to ignore, / And that’s what parents were created for”) shine just as brightly as newer nonsensical gems, such as Jack Prelutsky’s delectably gross “Herbert Glerbett” and Neal Levin’s hilarious “Baby Ate a Microchip.” Dark and contemplative subjects fare just as well in selections such as “When he was small, when he would fall,” Vladimir Nabokov’s powerful comparison of a childhood stumble to death in battle, and Wallace Stevens’ “The Snow Man,” as breathtaking in its portrait of winter as it is bleak in its meditation on nothingness. As if Kennedy’s rich poetic finds weren’t enough to hook adventurous youngsters, Muth’s shadowy, evocative watercolors render submission inevitable.

From the sonorant and strange to the profound and challenging, the poems and paintings collected here are sure to capture readers of any age.