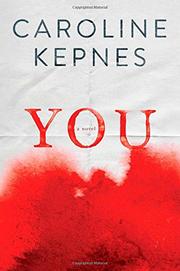 An impending sense of dread hangs over Kepnes’ cleverly claustrophobic debut, in which love takes on a whole new meaning.

Told from the perspective of Joe Goldberg, a seemingly normal Manhattan bookstore employee, the narrative is structured like a long monologue to the titular “you”: a young woman, Guinevere Beck, who becomes the object of Joe’s obsessive affection. They meet casually enough at the bookstore, and since she’s an aspiring writer just starting an MFA program, they bond over literature. Seems innocuous enough, even sweet, until we learn just how far Joe will go to make Beck—her preferred name—his own. Kepnes makes keen use of modern technology to chronicle Joe and Beck’s “courtship”: He not only stalks her on Twitter, but hacks into her email account and, after casually lifting her cellphone, monitors her text messages. In Joe’s mind, he’s keeping Beck safe from what he perceives as dangers in her life, particularly the clingy, wealthy Peach Salinger (yes, a relative of that Salinger); Beck’s hard-partying ex, Benji; and her therapist, the smooth-talking Dr. Nicky. When Joe and Beck finally, inevitably get together, it only serves to ratchet up Joe’s predatory, possessive instincts. Every text is analyzed as if it were the German Enigma Code, and every email is parsed and mined for secret meaning. There’s little doubt that the relationship is doomed, but Kepnes keeps the reader guessing on just how everything will implode.

There’s nothing romantic about Joe’s preoccupation with Beck, but Kepnes puts the reader so deep into his head that delusions approach reality.