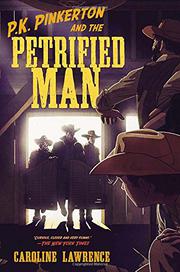 From the P.K. Pinkerton series, volume 2

In this quick-on-the-draw funny follow-up to The Case of the Deadly Desperados (2012), 12-year-old P.K. Pinkerton still roams the seedy streets of Virginia City of 1862…and he’s still up to his eyeballs in trouble.

The good news is his dream of setting up shop as a private eye has come true, even if the “eye” in his newspaper ad does look more like a potato. His first client is a runaway slave girl who witnessed the strangulation of a Soiled Dove named Short Sally Sampson and thinks Sally’s killer is stalking her. P.K. is so absorbed in the case it’s easy to forget his foster parents were murdered just two weeks before. As in the last Wild West adventure, our half-Lakota hero records his suspenseful story on ledger sheets and struggles with his “Thorn”—his inability to show or read emotion that today might be called high-functioning autism. P.K.’s straight-shooting personality, integrity and good heart make readers want to follow him to the ends of the Earth…if not directly to Short Sally’s killer. Run-ins with the truth-twisting Sam Clemens and Civil War references tether this lively mystery to a colorful, if grisly time in U.S. history.

A warm, wise, wild and woolly second offering in the Western Mysteries series.