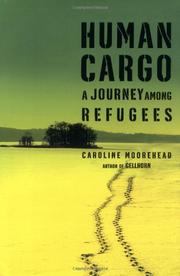 A Journey Among Refugees

Journalist and biographer Moorehead (Gellhorn, 2003, etc.) provides a passionate brief on behalf of millions of refugees across the globe.

Dictatorial regimes and calamitous wars in the 20th century have produced continuing crises involving exiles. Though there are “only” 12 million refugees in the world today (compared with 19 million in the mid-1990s), attitudes toward them have hardened, notes the author. They survive mountain crossings and shipwrecks, endure hunger, pay smugglers’ fees, and land in unfamiliar countries with no money. Then they languish for years in holding pens as bureaucrats and lawyers debate whether they should be received or deported. In the post-9/11 atmosphere, heightened fear of terrorism has led more governments to pressure the United Nations High Commission for Refugees to pounce on inconsistencies and small lies as an excuse to deny asylum. Visiting such places as Cairo, Sicily, Tijuana, Australia, Great Britain, and Guinea, Moorehead crafts “a record of what happens to people when their lives spin out of control into horror and loss.” Her unflinching depiction of cases without end and governments without mercy recalls the works of Kafka, Dickens, and Naipaul. Dozens of portraits give sinew and voice to representative examples of this human flotsam. Mothers quietly mourn babies they were forced to leave on the roadside; young men stare sullenly, unable to comprehend how to get out of their camps; and children grapple with traumatic memories of torture and death. It is nearly impossible not to be moved by such plights, and in at least one case—Palestinians seething with resentment against Israel for dispossessing them—Moorehead could have shown more objectivity by explaining the other side’s position. But she evokes refugees’ chaotic and miserable conditions with searing power, as in this description of Cairo: “Wherever the buildings are most derelict, the electricity supplies most sporadic, the water least reliable, there the refugees live.”

A compassionate and sterling chronicler rescues from facelessness the victim-survivors of man’s inhumanity to man.